You can earn up to 30% on Product Sales

The History Behind Avon

In 1959, operations began in the UK and today Avon is one of the top 3 beauty brands in the country with growing market share in the UK beauty market.

Introducing new and innovative products with national television advertising and worldwide known celebrities, and a greater opportunity to join this modern Avon.

The roots of Avon can be traced back to 1886, when struggling door-to-door salesman David McConnell made the decision to sell perfumes, rather than books to New York homes.

Known in those days as The California Perfume Company, the business quickly prospered and Mr McConnell appointed his first General Agent, Mrs Albee. At a time before women even had the right to vote, Mrs Albee was instrumental in establishing the unique sales method that continues to be Avon's hallmark today.

David McConnell had aspirations to expand his company overseas and recognised the need to change the company name. Having been enchanted by the beauty of Stratford upon AVON during a visit to England, David McConnell was inspired, and in 1939 he chose the name 'Avon' for his growing international company. 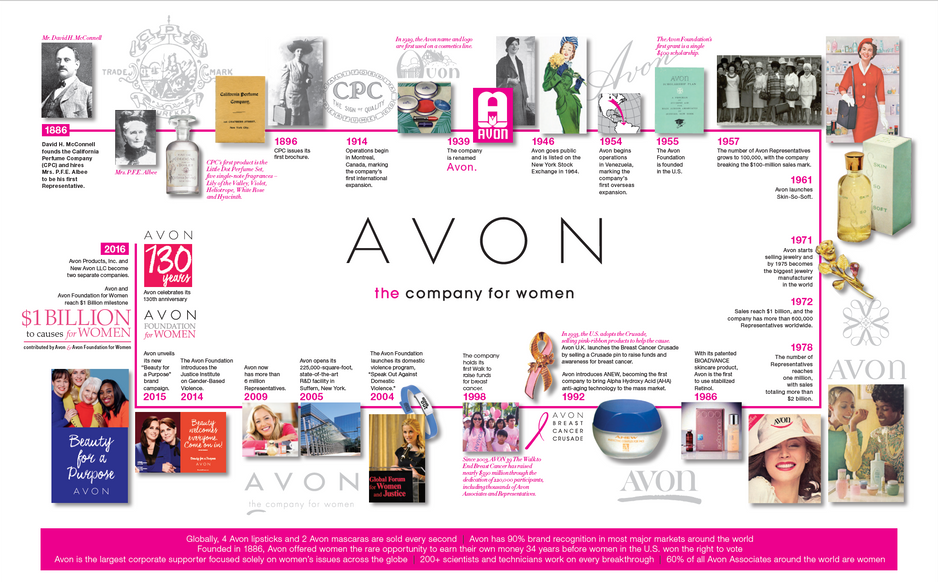 Avon does not test products or ingredients on animals anywhere in the world. They have been working for acceptance of non-animal methods for three decades.

For More information on Avon and their causes please visit   https://www.avonworldwide.com or Click here.

The statements, views and opinions made or expressed on this website are not made by or on behalf of Avon Cosmetics Ltd.

It is illegal for a promoter or a participant in a trading scheme to persuade anyone to make a payment by promising benefits from getting others to join a scheme. Do not be misled by claims that high earnings are easily achieved.

Any and all details collected whilst on this site are collected only in order to contact you to further your request. No Data is stored on the Website. Your Data will not be shared with other people or organisations except as authorised by you when requesting more infomation.